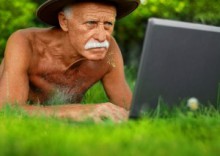 Vitamin D has long been known to help the body absorb calcium. But now it appears that this vitamin has much wider effects — at least in Caenorhabditis elegans, a nematode worm species and a well-known model organism for biological research.

Senior co-author Prof. Gordon Lithgow from the Buck Institute for Research on Aging and his colleagues utilized C. elegans to examine the mechanism by which vitamin D influences aging.

“Vitamin D engaged with known longevity genes – it extended median lifespan by 33% and slowed the aging-related misfolding of hundreds of proteins in the worm,” Prof. Lithgow explained.

“Our findings provide a real connection between aging and disease and give clinicians and other researchers an opportunity to look at vitamin D in a much larger context.”

This work sheds light on protein homeostasis, the ability of proteins to maintain their shape and function over time. It’s a balancing act that goes haywire with normal aging — often resulting in the accumulation of toxic insoluble protein aggregates implicated in a number of conditions, including Alzheimer’s, Parkinson’s and Huntington’s diseases, as well as type 2 diabetes and some forms of heart disease.

“Vitamin D3, which is converted into the active form of vitamin D, suppressed protein insolubility in C. elegans and prevented the toxicity caused by human beta-amyloid which is associated with Alzheimer’s disease,” Prof. Lithgow said.

“Given that aging processes are thought to be similar between the worm and mammals, including humans, it makes sense that the action of vitamin D would be conserved across species as well.”

The pathways and the molecular network targeted in the study (IRE-1/XBP-1/SKN-1) are involved in stress response and cellular detoxification.

“We’ve been looking for a disease to associate with vitamin D other than rickets for many years and we haven’t come up with any strong evidence,” said Dr. Clifford Rosen, Director of the Center for Clinical and Translational Research and a senior scientist at the Maine Medical Center Research Institute, who was not involved in the study.

“But if it’s a more global marker of health or longevity as this paper suggests, that’s a paradigm shift. Now we’re talking about something very different and exciting.”

“This work is really appealing and challenging to the field,” said Prof. Janice Schwartz, from the Jewish Home in San Francisco and the University of California, San Francisco, who was also not involved in the work.

“We focus on vitamin D and the bones because that’s where we can measure its impact. I believe that vitamin D is as crucial for total body function and the muscles as it’s for bones.”

“Vitamin D influences hundreds of genes – most cells have vitamin D receptors, so it must be very important.”

This article is based on a press-release from the Buck Institute for Research on Aging.